The Rocket Launcher is a weapon which fires explosive ammo that moves slowly in the air and explodes on impact making opponents which are close to the impact lose health. 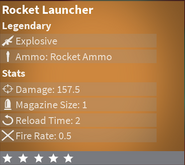 Rocket Launcher Legendary's Statistics
Add a photo to this gallery
Retrieved from "https://island-royale.fandom.com/wiki/Rocket_Launcher?oldid=11759"
Community content is available under CC-BY-SA unless otherwise noted.